Dynamite Fishing World Games is a grindy little bugger. Aside from grinding $1,000,000 money from fish sales it's a relaxing, easy game. The grind to the 1mil is going to set you back hundreds of hours so keep that in mind before popping it onto your profile.

The game consists of 5 worlds or cups with 5 races each. To win a gold cup you need to place 1st in each race within the cup. To win a race you need to kill and obtain more fish than your opponent. It doesn't matter if they make it to the end first, what matters is who gets the most fish. You kill fish by throwing dynamite with the

button, utilizing power ups with the

button or activating your super power with

If you obtain 30% more fish than your opponent you'll obtain the ability to obtain more money or extras like masks and decor for your ship. Eventually once you've obtained all the decor its just extra money you'll receive and that will help greatly towards earning $1,000,000.

Sink with your ship!

Your ship will sink once you've depleted all of your life.  You're able to resurface and continue at the cost of $5.  Your life bar appears above your boat as shown below: 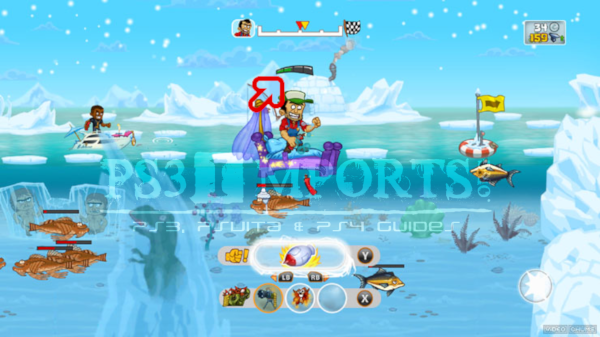 Simply catch 666 fish.  You'll get this trophy very early on while you're playing.

Rumble in the Jungle

Each cup has a total of 5 races.  I use the word "race" loosely as your main goal here is to kill and acquire as many fish as possible.  It doesn't really matter if you beat your opponent to the finish line or not so long as throughout you're obtaining more fish than them.

In the beginning it may seem difficult to beat the AI but as you level up your character and your boat and as you acquire new characters and boats this will become a breeze.  You don't need to win the cup to obtain these trophies.  You simply need to finish it.

I would recommend going for as many gold trophies in these cups as possible as that will help you in the long run and the grind.  The races vary slightly.  Some will just be straight forward fish hunts and others will throw boss fish at you.  The last race in each cup (Race 5) will always end with a boss fish battle.

Fish and Loathing in Las Vegas

Pay attention to the what is required at the beginning of the race so that you can accurately choose which power up to go into the game with.  If it requires a specific one make sure to choose that as it will give you leverage.  The game will provide you with that power up but if you go into it with an extra you're at an advantage.

I highly highly recommend unlocking and using the second available character (the redhead) as her skill is to throw the dynamite very quickly.  Upgrade this skill for her also ASAP.  She'll throw the dynamite so fast at 100% that it makes the races a cakewalk and greatly helps with these extra missions.  You'll unlock her by obtaining gold in the races and earning a gold cup for coming in 1st overall in the races. 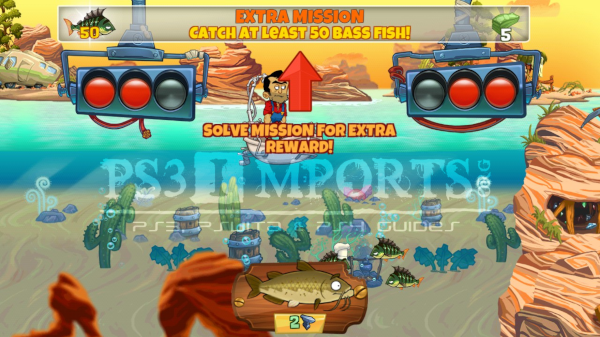 This is where the grind comes in.  You'll only earn about $10 a race in the beginning and until you unlock a boat that offers double coins. Do the following ASAP:

Make sure to use Wild Wendy, Dynamite Junk and focus on just killing as many fish as possible.  This trophy alone is going to take hundreds of hours so just do a bit at a time and stick with it.

Defeat as many Boss Fish as possible!

Boss fish pop up in the 5th race definitely.  Otherwise they are random and will appear in other races as well.  You'll need to defeat 50 boss fish for this trophy. Boss fish aren't difficult especially if you've unlocked and fully upgraded Wendy.  Just quickly spam

to unload dynamite onto the boss.  This will pop naturally as you work towards Catch A Millionaire.

This guide is ready for use