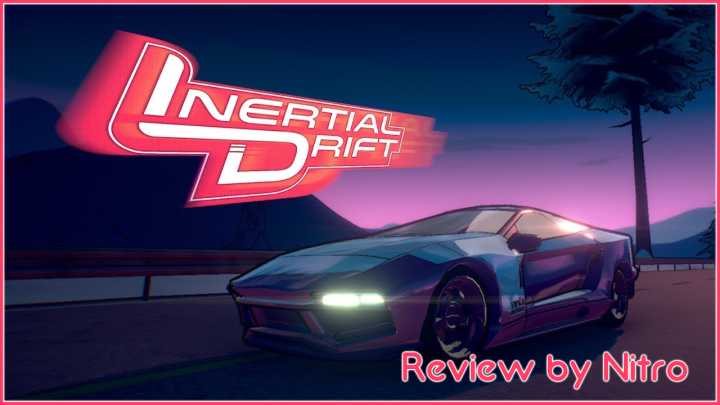 Introduction
Inertial Drift is a twin stick arcade-like racing game where the main way of turning corners is drifting. Developed by Level 91 Entertainment and published by PQube, this brings a whole new challenge to players who thought they knew everything to know about arcade racing games.

Gameplay & Controls
The main focus of a racing game is of course how well the game handles and of course racing! And in this category, I can say Interial Drift does quite well. You have a bunch of different events during the main campaign of the game, everything is provided here: Time Attack, Ghost Battles, Style Events, Race, Point to Point Checkpoint and Duels!
The gameplay is focused around… you guessed it: Drifting! Which I thought I would be able to go into with no troubles at all. I’ve been playing Need For Speed for over 15 years, I know how to drift in racers. Boy, this is a WHOLE different experience. First of all, drifting is the ONLY way to turn corners. Your turn speed – which is unchangeable – is so slow to the point where it is useless. This means you will have to drift around turns which you naturally should be able to just turn around. This does add a somewhat frustrating level when you play, but it does mean that practicing every track and making sure you make every drift count so you don’t lose too much speed, is pivotal to success.
So, how is the drifting? Pretty incredible and unique. The twin-stick mechanic really nails that arcade feel even playing this on the most modern consoles around. Using the right stick to start your drift and controlling the trajectory with the left stick, it really makes sure that you think on the fly to make sure you are going about the corner the correct way. Breaking whilst drifting will allow you to deal with sharp turns with the downfall of losing a lot of speed. Meanwhile, normal drifting won’t lose you a whole lot of speed, but you won’t be able to make those tight and narrow turns to avoid walls or obstructions such as sand or snow.

Story
The stories provided in this game are pretty lacklustre and boring. Depending on the character you choose you will have a different view and it centres around your character getting ready for the Grand Prix. The characters have no depth and the “cutscenes” are just lines of dialogue attempting to push the story forward and you to the next race. I found myself skipping all the text entirely toward the start of the second track.
Also, there is no voice acting here, just text. Which is not a bad thing, just something to keep note of.
Moreover, the character messages during a race are laughable at best. The AI are clearly scripted to say particular things on certain laps, for example: I was 5.5 seconds ahead of the AI opponent and she started trash talking me saying to ‘speed up, slowpoke’. (She should have taken her own advice.)

Content
There is quite a bit of content packed into Inertial Drift with all the separate modes it has.
First of all, it has 4 campaigns, spanning 5 levels each and different cars in every single one.
Secondly, you have the Challenges Mode. These are challenges you will be able to unlock just by beating the campaign(s). You will use the 12 different cars which all handle differently and allow you to unlock medals based on your performance.
Thirdly, you have Arcade which is Custom Events where you can race and post times and scores to a global leaderboard.
Fourth, is the hardest mode of them all: Grand Prix. This mode takes a lot of dedication in the car you choose to do it with and the tracks. You can run this with all the cars you have unlocked in Story Mode/Challenges Mode.
And finally, SplitScreen & Online. SplitScreen is always appreciated with arcade games like this. You can have a bunch of friends over and have a blast. The online portion however was pretty much dead upon arrival. Even now, with all search options at the maximum, you will not be able to find a game.

Trophies
In short, this trophy list is going to be a difficult and long one. This list DOES contain a platinum trophy and you will be looking at about a 70+ hour completion depending on skill. The platinum is rated a 7/10 in reference to people talking about this platinum.

Conclusion
In conclusion, I quite enjoyed my time with Inertial Drift and will be going for this frustrating platinum. With all the modes the game provides I believe the purchase is very warranted for people who enjoy their arcade racers and are looking for something a bit different. With tight controls and fun gameplay, you really can’t go wrong, even the price is right!

Inertial Drift is $19.99/£15.99 and is available worldwide on the Playstation 4, Xbox One and PC. It will also run on Next Generation Hardware.