Honor and Duty: Arcade Edition is a very arcade-y shooter with movement and physics to reminisce Doom and Unreal Tournament (just no where as good).  If you can get over the woeful shooting, this game is quite short and easy -- perfect if you're looking to add another 100% game to your profile.

In this step you will finish the first mission of the game. This is the only "Semi Open World" level, the other two you will be defending an area.

Not a Scratch for details). You will also be able to get the only story-related trophy in the game.

In this step, you will be completing the second level as well as getting all the misc trophies. You will be defending a base in this level, so make sure the base still has health at all times, otherwise you will fail. Also do note that you can reset barrels, toxic canisters and fuel depots by exiting to the main menu and resuming the game.

Step 3: Complete ranking up
In the final step, you will play this until you reach the final rank, thus granting you the trophy and 100% completion. However, in this level you can get any misc trophies you missed in level 2. It shouldn't take an overly long time to get to the final level.

Restore a teammate's health as the medic.

For this trophy, you will need to spawn as the Medic class.

Once you are spawned as the Medic class, go up to any team mate who has taken damage and stand next to them and the trophy will unlock.

To know if a team member has taken damage, look above their heads as their should be a green health bar signifying how much health they have/ how much damage they have taken.

Attain the rank of Second Lieutenant.

This will unlock as you keep ranking up and completing levels. See

During Level 2 and 3 you will have to protect a central base that will have a lot of enemies coming to destroy it.

You will want to respawn as the Engineer class. After that, wait until the base has about 1/4 health remaining. This will ensure that the base is classified as having "critical health". When this is achieved, stand next to building and it will start to replenish it's health. I found the best place to stand was directly behind the building. Doing this will make the flip the spawns of enemies to in front of you, this allows you to hide and prevents you from being shot and/or dying.

Train all 4 soldier classes in a single round.

To have the ability to train all soldier classes you will need to build your barracks first. After this is done, upgrade it. You can access the Barracks interface by pressing

. Here you can choose which class you want to train first. I would recommend doing the latter classes first as they will take the longest to train and you can only train one soldier class at a time. Furthermore, when you train a class fully, they will come out and start killing enemies. Whilst they are not always effective, if you only have a few enemies left and you have the Heavy class to still train, the round will end before you have a chance to have that class trained.

I recommend doing this in the later rounds where 55+ kills are required to end the round as this will give you adequate time to train all 4 classes.

Dispatch an enemy by blowing up your own fuel depot.

To "dispatch" an enemy by blowing up a fuel depot you must first find one. There are 3 locations for these with 1 being in level 2 and 2 being in level 3. These have an incredible blast radius and have a high damage output as well so you shouldn't have any issues with killing someone with these.

Level 2. Just to the right of your base. 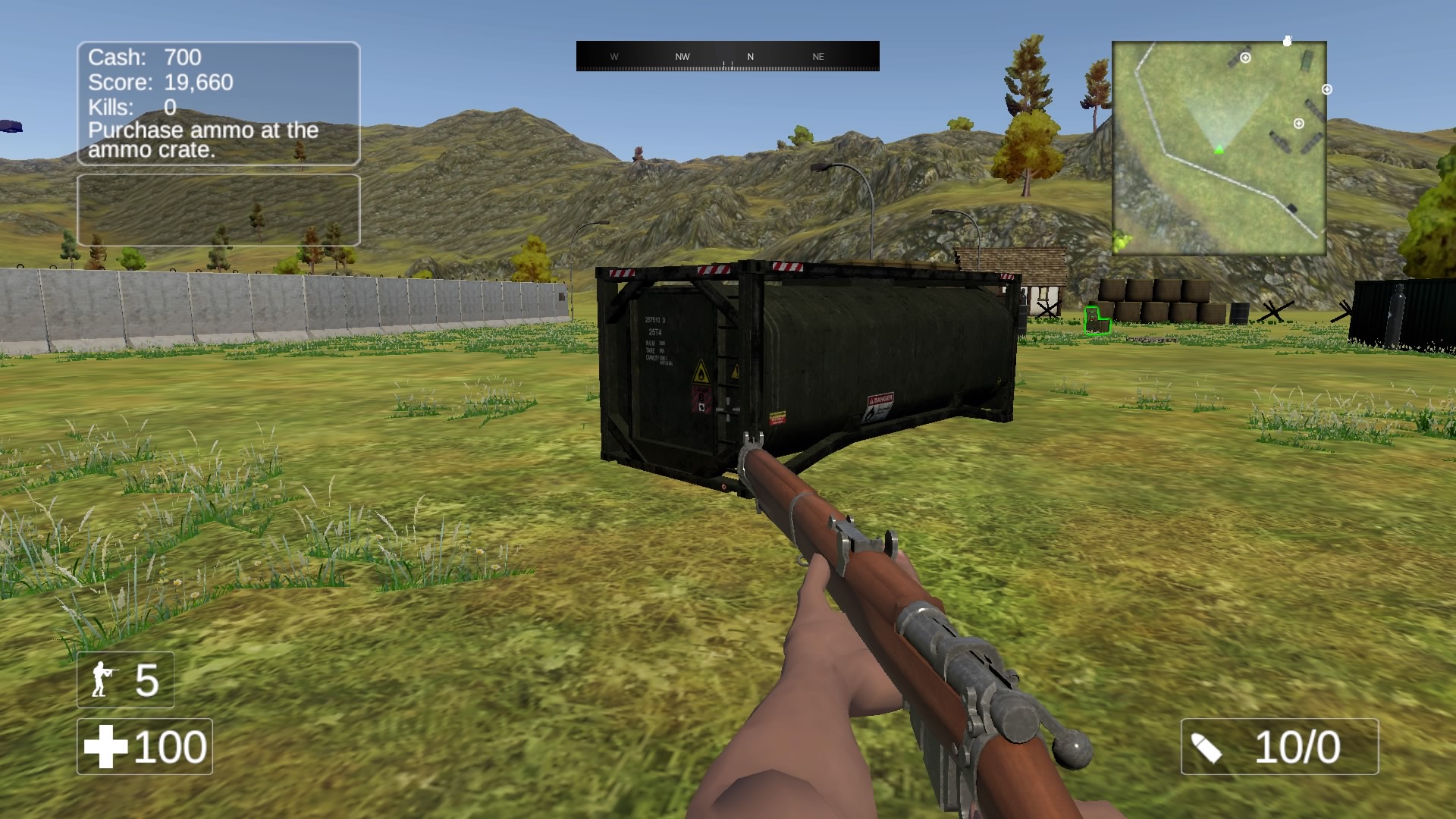 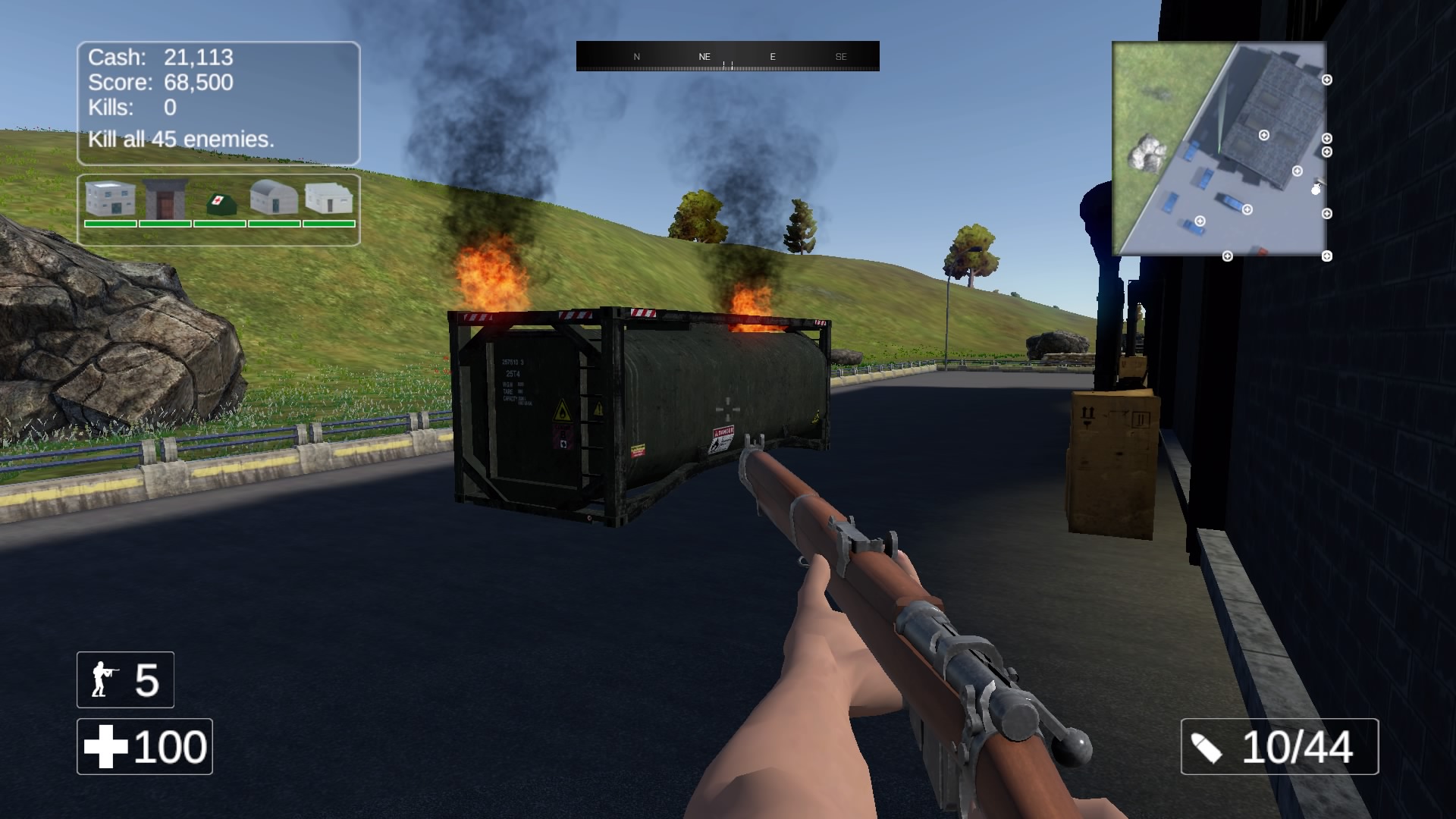 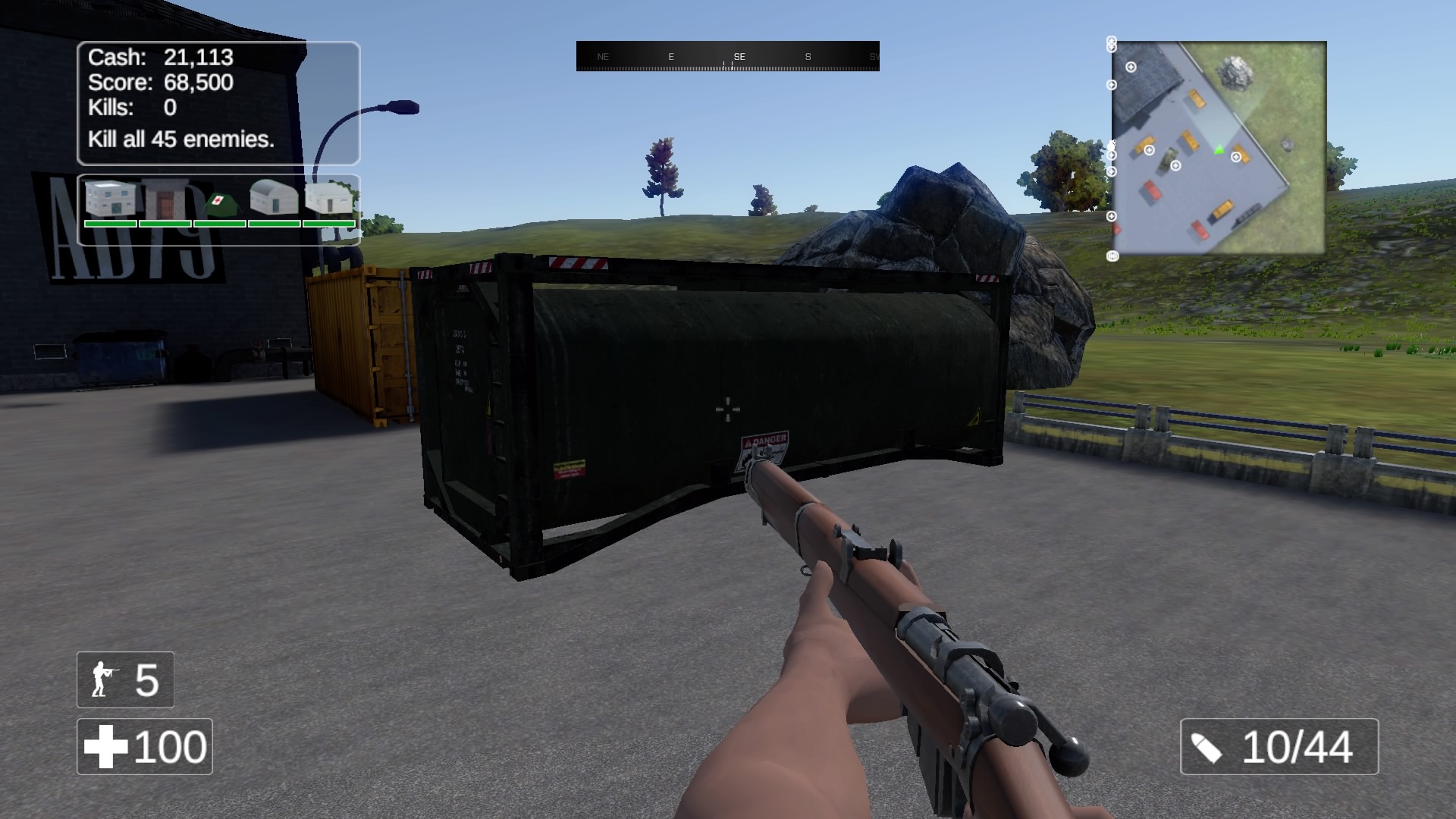 Eliminate an enemy with an exploding barrel.

To "dispatch" an enemy with an exploding barrel, what you will need to do is shoot a barrel and have it explode, killing an enemy. It can be a bit hard to do this as they take a while to explode, so you have to pre-empitevly shoot them.

Having said that, this is best done is level 2 as barrels are aplenty and there are a few next to each other where your base is located. This means you could possibly have a clump of enemies around your base and if one explosion doesn't kill anyone, the next one should.

Here is what a barrel looks like. This image is from level 3. 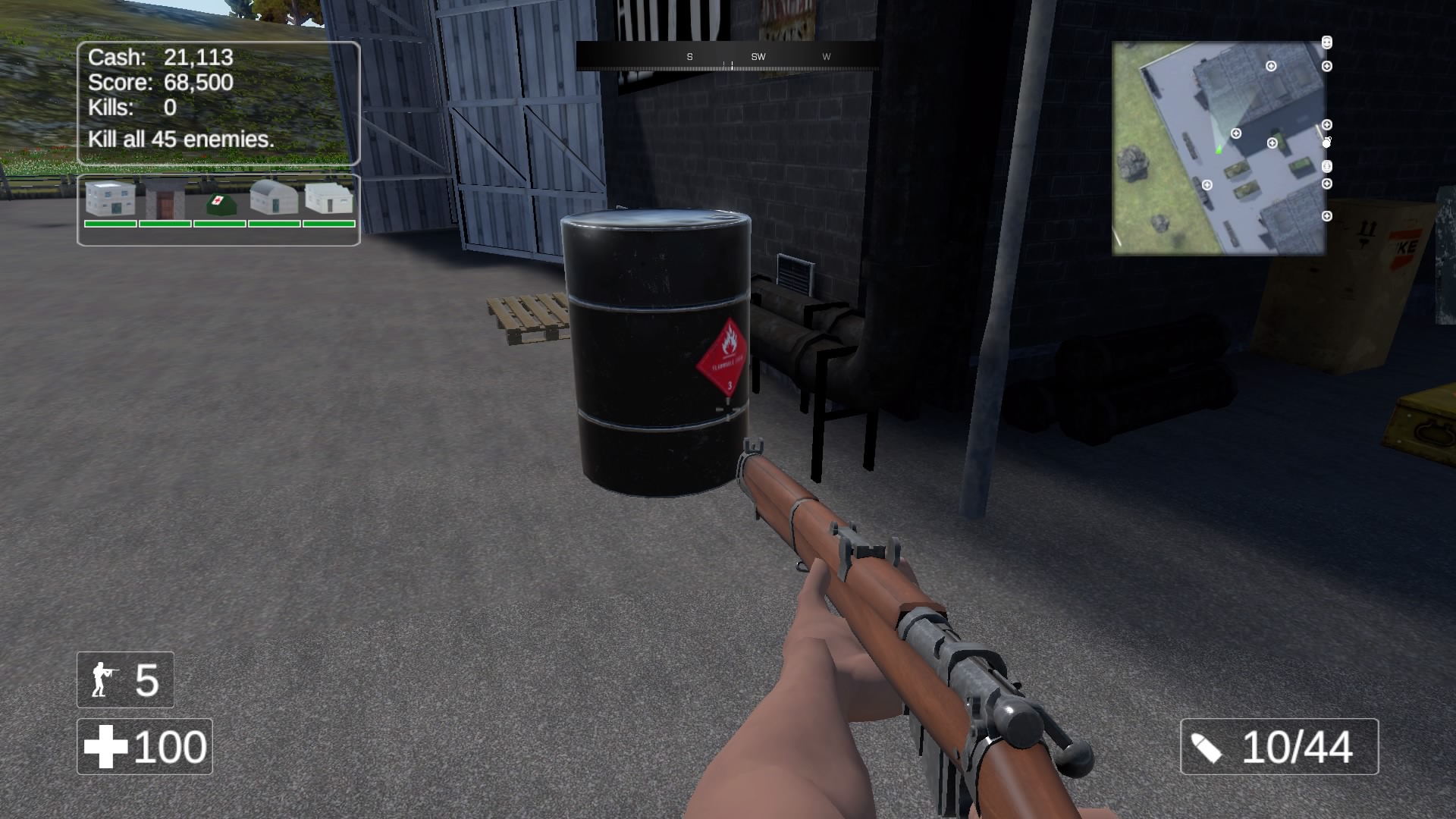 Destroy an enemy medical tent with the flame thrower.

In level 2, there will be an enemy Medical tent North of your Base's building. It can be identified as the green tent with a big red + on it.

To be able to buy the Flamethrower, you must first build & upgrade your armory to level 3. This can be done by pressing

. After this is achieved go to the weapon's cache and scroll through until you find the Flamethrower. After this, head North of your base and you will see the aforementioned tent in the distance. Simply walk up to it and burn it to the ground and the  trophy will unlock.

Do note that you may have to be the soldier class in order to use the flamethrower. 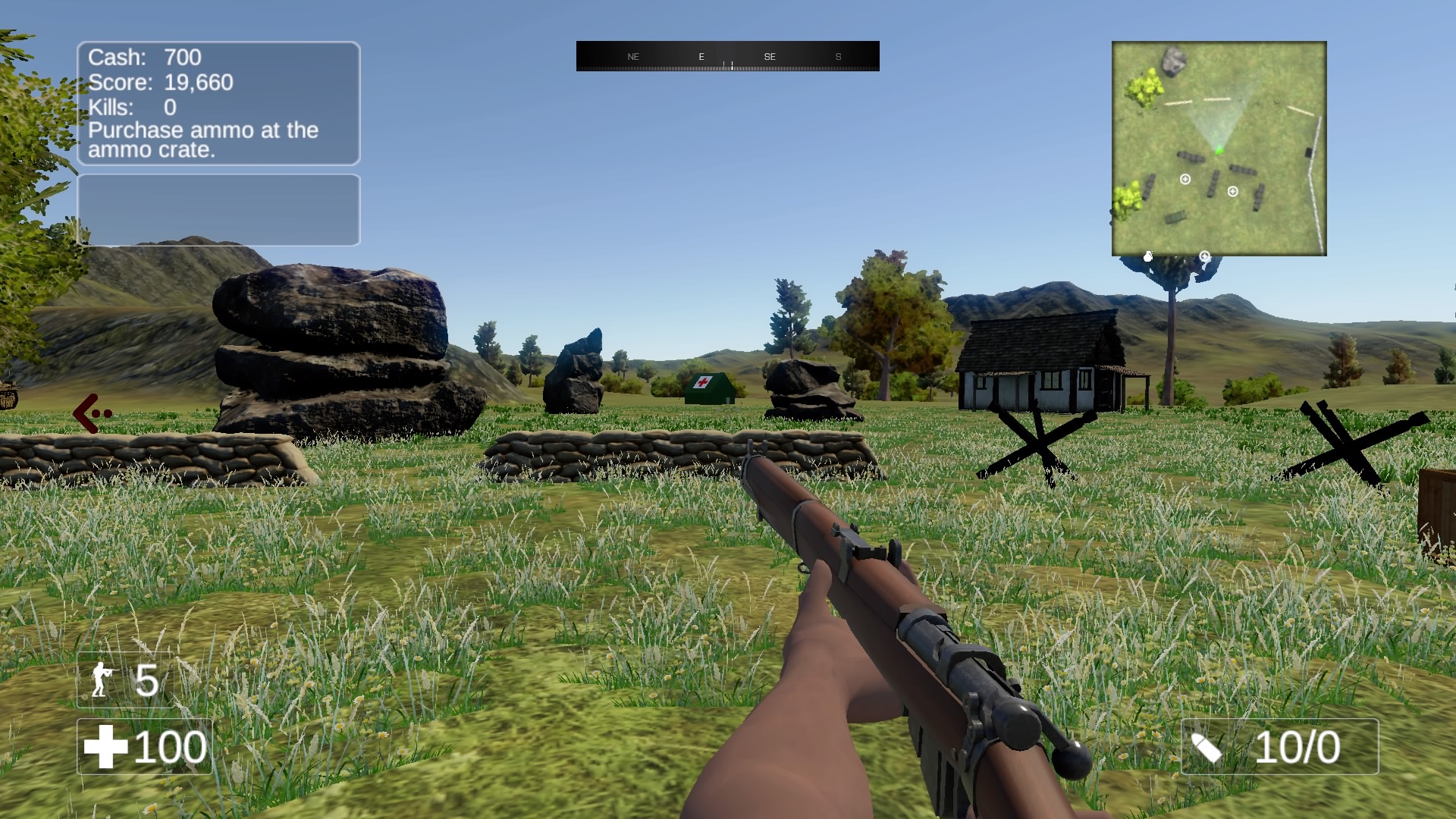 Complete an entire level without dying.

Eliminate an enemy with toxic gas.

The first encounter you have with toxic gas is in your base on level 2. The toxic gas are in very skinny and tall canisters that, when shot, will emit a green smoke (gas). If an enemy runs through this gas and/or stands in it for a second, they will be killed. This is very easy to get as the gas lasts for an extended period of time. 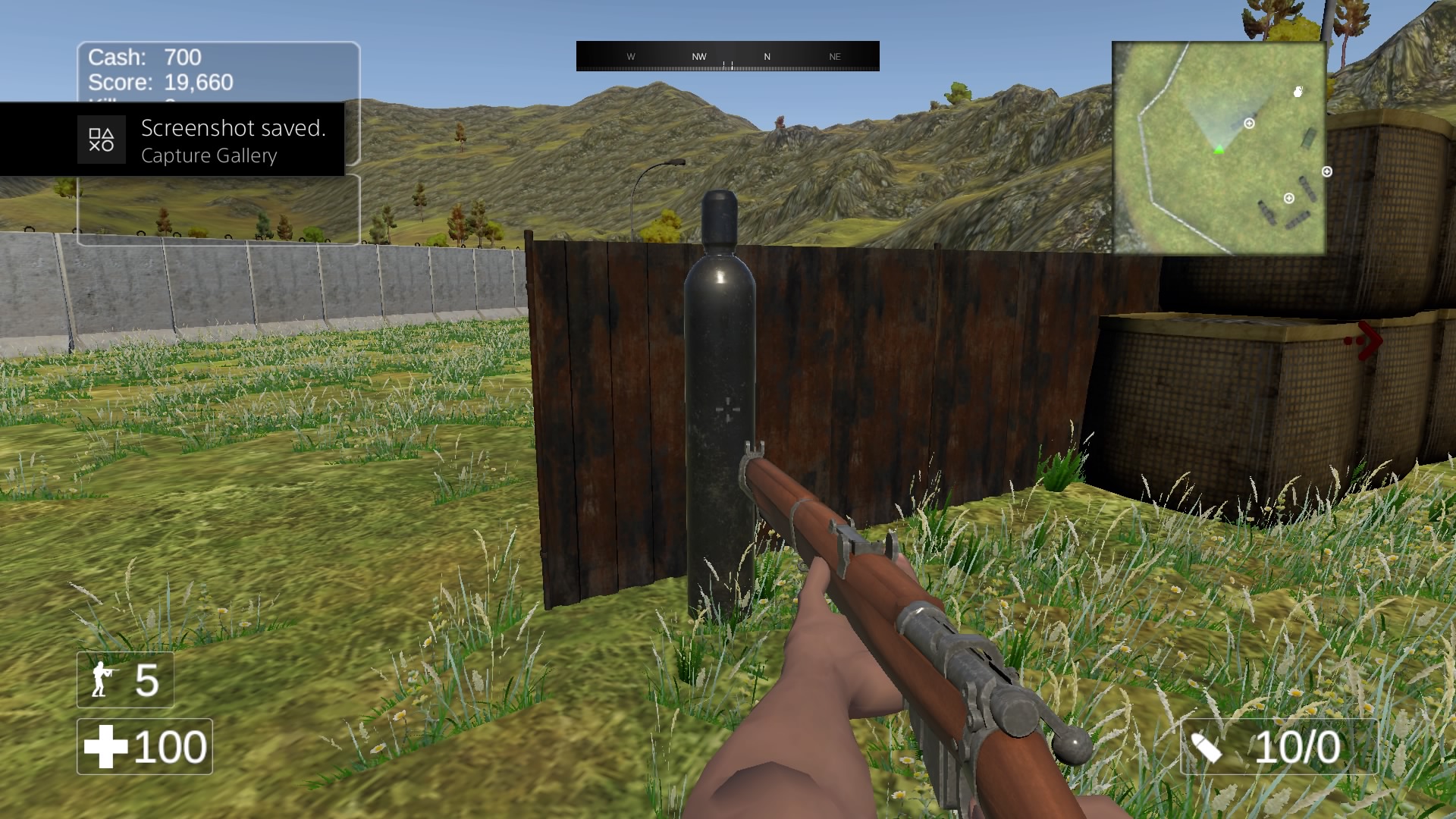 Destroy an enemy base with the rocket launcher.

This is story related and cannot be missed.

At the end of the first level, you will be tasked with destroying a building up a hill with a rocket launcher. After obtaining the Rocket launcher, shoot the building a few times and it should be destroyed and complete the objective triggering the next level.

Complete a round without getting hurt.

This is best done in the first round of the first level. In this round, you are tasked with killing 5 enemies. From the starting point, run forward and there will be an opening to your right. DO NOT GO THROUGH IT YET! Instead, go behind the big rock, you should be able to look just above it. You can head glitch here so none of the enemies coming out can hit you. After the 5 enemies are dead, you will pop the trophy. 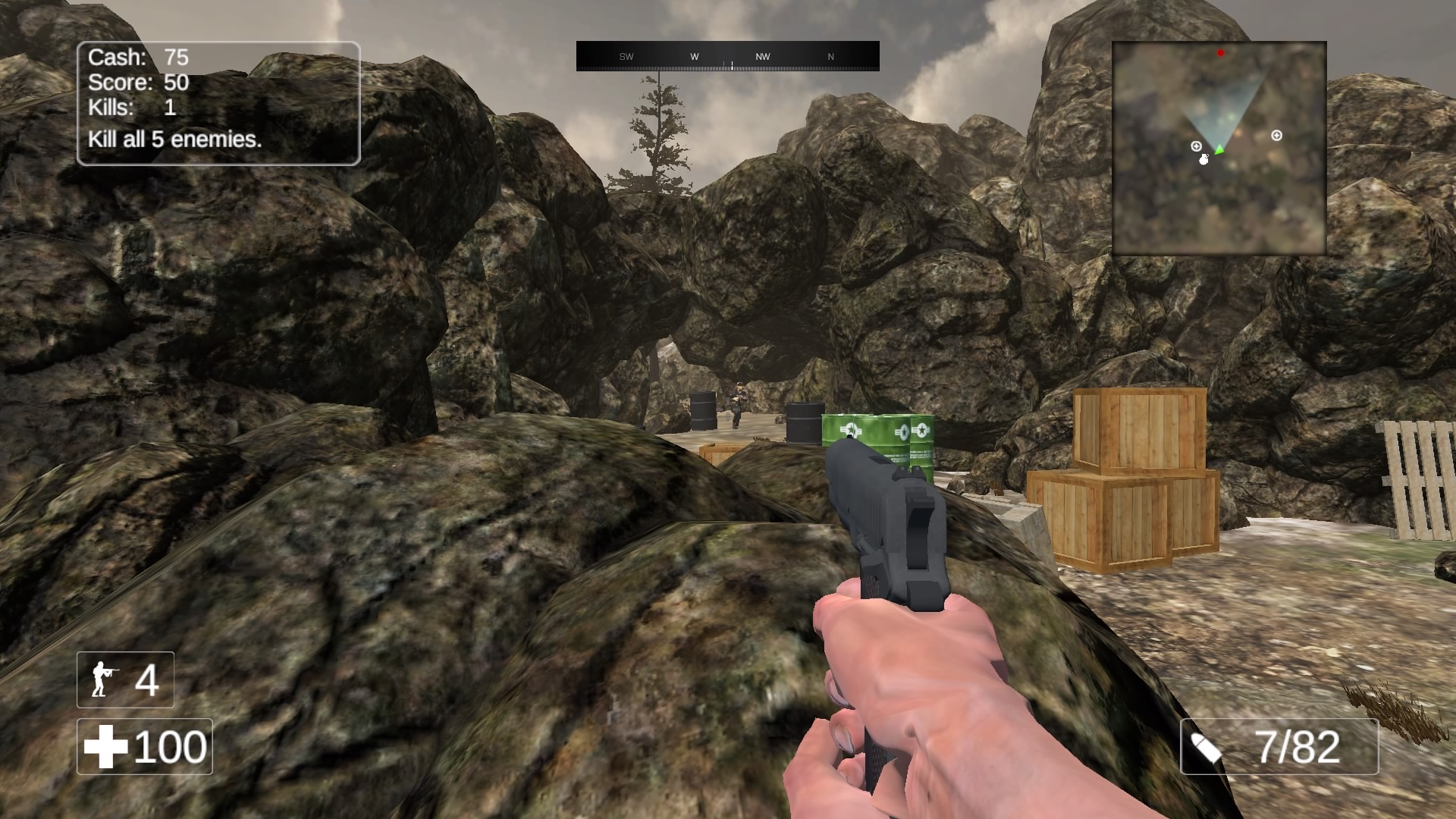 Achieve the rank of General.

This will likely be the last trophy you unlock for your 100%. All you need to rank up is keep killing enemies and completing levels.

I unlocked it about halfway through level 3.

Thanks for the guide.

How is everyone doing barrel of fun? I seem to struggle to getting an enemy near the barrel

I guess I just got the barrel randomly, weird stuff

Thanks for the guide

How is everyone doing barrel of fun? I seem to struggle to getting an enemy near the barrel

It's definitely one of the harder trophies in the game.

Back to Honor and Duty: Arcade edition