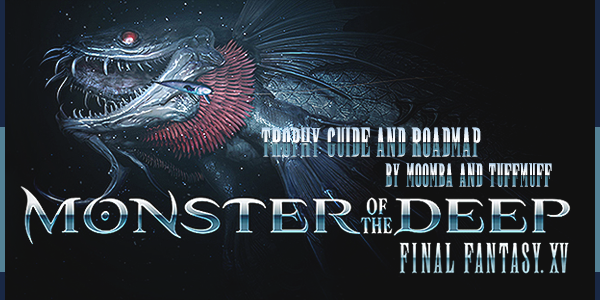 Banners and headers by TwilightStar

Monster of the Deep: Final Fantasy XV is a spin-off game within the Final Fantasy XV universe. You play as a Hunter tasked with finding and destroying Daemonfish. The main story gameplay involves some fishing but largely focuses on boss battles using a crossbow. Most of the trophies, on the other hand, require a lot of fishing. This is Square-Enix’s first VR game. As of the time of writing this guide, it is an incredibly glitchy game. Working around the glitchiness can take a while to get used to, but once you understand the game it’s fairly easy to play. The Platinum Trophy can be obtained in 15 hours, or possibly even less, but the random elements of the game (whether fish will bite the lure or not) can increase the time needed by a large margin.

I highly suggest you use two Playstation Move controllers. The game is technically playable with a Dualshock 4; but fishing is highly dependent on the accuracy of your casts. I found it nearly impossible to cast accurately with the Dualshock 4. Also, while using the Dualshock 4, your characters arms block most of the screen.

on Dualshock 4) to recenter your view. Every time I entered a new area, the game always placed me away from my character for some reason. If your hands are black you are far away from your character. The game always has you attached to the character model, so it’s essential to be where their head would be for accurate gameplay.

Some fish are shy to bite but will usually bite eventually. On one of the hunts I found a fish that wouldn’t bite at all, leading me to believe it may have been a glitch. It took me 3 hours to complete this hunt. I do not think this is an intended mechanic. If you’re having trouble with a hunt try leaving and restarting the hunt until the fish is in a different location.

If you are having trouble catching a fish from far away, some fishing holes are accessible from multiple angles.

While on a hunt, you need to use a specific lure to catch the target fish. Most other fish will bite anything. I used the Fatal Roulette: Ahriman lure for most of the regular fish. Cactuars are the exception and will only bite 10,000 Needle lures.

Don’t spend much gil on optional (clothing) items. If you spend too much gil you may not have enough to buy all of the tackle with hunt rewards. This doesn’t make it impossible to buy everything, but it may require you to do online tournaments to get more gil. If needed, I would suggest Major League. Not many people play this game so it’s easy to place high enough in the rankings to earn at least 3,000 gil. Unfortunately you have to wait until the tournament is over to collect the reward.

Step 1: Story
Complete all of the story missions. After the introduction you are brought to your cabin. Enter your car to access the next mission. At one point you will be required to participate in a tournament to continue. Afterwards you are free to do missions until reaching the end. The story missions consist of catching enough fish until the daemon fish is lured out of hiding. Once it appears your rod/reel will be replaced with a crossbow and you'll need to battle the daemon fish to weaken it in three phases then you're able to "reel" it in.

Step 2: Hunts
Complete every hunt. Like story missions, these are accessible from inside of your car. The required fish will show as red when you use your sonar. You need to use a specific lure or set of lures which are shown on the hunt page while selecting which hunt to go on. Every hunt must be completed to gain access to the next level of hunts. Use your money from hunts to purchase rods, reels, and lures. Some lures are obtained as rewards from hunts, so you can save some money that way.

There are random objects on the ground (like a bucket or banana peel) in each area. Keep your eye out and examine these. Most of these are brought back to your cabin and placed in random spots. You only need to examine one that is brought back for the Home Sweet Home

Step 3: Fish
Catch all of the fish in each area. When in an area, open the menu, go to tackle, and press

to open the collection menu where you can see which fish you have gotten in that area. It can be a bit tricky to catch everything, depending on your luck. Fish up everything in the area and if you haven’t gotten everything then re-enter the area until it’s cloudy or raining. Seaweed and boots don’t appear on sonar, but they will glow yellow for a short time if you land in a fishing hole nearby. If you are having trouble finding a tin can in an area where they appear, turn rumble on and the controller will rumble when you are near if nothing else is there.

The One That Got Away

Step 4: Cleanup
Buy all the tackle if you haven’t done so already. Do Tournaments for gil if you don’t have enough after finishing all of the hunts.

In Rod We Trust

Master of the Deep

Master of the Deep

To perform an excellent cast simply land in any of the circular spots in your fishing area. You can find these spots by holding down

to use your sonar.

Participated in your first tournament.

This is necessary to advance the story. After the “Unsettling Shadows” story mission you will gain access to the Torney option in the car menu. The first time you select it you will enter a mission in which you will face Noctis in a tournament. You only need to catch a few fish to beat him. After you complete the mission you will get the trophy. You do not need to participate in an actual online Torney to get the trophy.

The One That Got Away

Simply lose a large fish. The game makes it very easy to reel fish in so if you find that you haven’t received this naturally just get a bite on a big fish and then don’t follow the left/right prompts will reeling one in.

Decorated your cabin for the first time.

While in any area you will see random objects on the ground. Often, after you examine one, it will seem to disappear. These objects are brought back to your cabin and placed automatically. The trophy will unlock when you get back to the cabin after examining one of these objects.

Thank You for Shopping

This will pop when you’ve bought your first bit of equipment. Can be simple as simple as a 50 gil lure.

This will come naturally. You’re going to spend well over 10,000 gil on all the tackle you need to purchase.

In Rod We Trust

There are 12 rods you need to purchase for this trophy. They are as follows:

There are 5 reels you need to purchase for this trophy. They are as follows:

There are a total of 61 lures that you need to purchase for this trophy. Some of the lures will be given to you as you progress. I suggest not purchasing lures unless completely necessary until you’re nearly done with all other trophies. By then you will have received quite a few of them without having to purchase.

The lures (and the fish they are listed as good for) are as follows:

Caught one of every fish.

See each respective location for the fish needed. Once you’ve caught every fish at every location this trophy will pop.

Catch your first big fish. This will come naturally while going towards all other trophies.

Catch a can or a soggy boot to pop this trophy. See the location trophies for details on which locations have these items. You’ll receive this on your way to catching all fish in all locations.

Simply go to "Hunts" in the menu when entering the car. Complete your first hunt and this trophy will pop. Hunts are just fishing missions where you're looking for a particular fish. The required fish will show as red when you use your sonar. You need to use a specific lure or set of lures which are shown on the hunt page while selecting which hunt to go on. Every hunt must be completed to gain access to the next level of hunts.

To reach Hunter Rank 5 you need to complete a total of 25 hunts. There are 5 hunts needed to reach each rank.

Tip: Make sure to pay attention to what lures are recommended for the Hunt you’re going on.

To reach Hunter Rank 10 you need to complete a total of 50 hunts. There are 5 hunts needed to reach each rank.

Tip: Make sure to pay attention to what lures are recommended for the Hunt you’re going on.

This will come naturally while fishing in all areas of the game. You will receive this trophy well before finishing everything else required.

This will pop once you’ve collected all 61 lures, 12 rods, 5 reels and 3 lines. See respective trophies for a list of each and their cost.

Caught all fish at Neeglyss Pond.

There are 22 fish to catch at Neeglyss Pond. They are listed below with suggested lures.

Caught all fish at the Forgotten Pool.

There are 21 fish to catch at Forgotten Pool. They are listed below with suggested lures.

Caught all fish at the Vesperpool.

There are 29 fish to catch at Vesperpool. They are listed below with suggested lures.

Caught all fish at Crestholm Reservoir.

There are 13 fish to catch at Crestholm Reservoir. They are listed below with suggested lures.
You can get away with catching every fish in this area with the Fatal Roulette: Ahriman. Others are listed though in the event you have issues.

Caught all fish at the Caem Shore.

There are 28 fish to catch at Caem Shore. They are listed below with suggested lures.

Caught all fish at Rachsia Bridge.

There are 22 fish to catch at Rachsia Bridge. They are listed below with suggested lures.

Catch a cactuar. They can appear in the below listed locations and bite any Giant Needle 10,000 lure.

Guide is done and ready for use/can be moved to a forum.  I just need to figure out the videos here lol

Thank you!  I think I got them fixed.

I cant understand how this game take this long if a lot of people are able to get this done in little over 1 day. I get this is random though.

I cant understand how this game take this long if a lot of people are able to get this done in little over 1 day. I get this is random though.

I think it can definitely be done quicker.  I'm not done with my plat so I'll report back with the hours once I finish.  I'm trying to get through it faster than Moomba.  It took him 15 hours and even he said it could be faster. Sometimes you get to a location and the fish are SUPER easy to get.  Other times it seems like nothing will bite or that it takes longer for them to bite.

I'll definitely update once I finish my plat and have an exact time.  I got distracted with Horizon but I'm gonna play more of this this weekend.

Back to Monster of the deep: FFXV