2 replies to this topic

Guide By EssTee, Banner By Tuff.
Overview:
Introduction:
Dead Hungry is a fun and fast-paced VR game developed by Q-Games, the developers of the PixelJunk series. In this game, you own a food truck and make dam good burgers, your burgers are so dam good they have the power to bring zombies back to life! That is your job, revive zombies to human form by satisfying their hunger, to pass through the levels. The game concept is simple, its a cooking sim, that keeps you on your toes. There is plenty of light humour chucked in so the games emphasis is on the fun factor as opposed to horror but be warned, it certainly can get frantic!
Walkthough:
Step 1 - Get 3 stars in all 30 levels.
For the majority of the levels you shouldn't have too much problem getting 3 stars, if you miss a 3 star just replay the level and stall zombies for longer until you have made them extra-large burgers and that will be all you have to do differently. I will list in the Trophy Guide my 3 star pass scores so you have a target to aim for to guarantee all stars.
The only harder level is the final level but again, with using my simple stated strategy of stalling zombies to make sky high monster burgers, you will pass it as long as you move fast! If you would find a video guide more useful for level 30, I have made one for you HERE!
Key tips:
1. ONE hit will kill you, no matter how big or small the zombie is. If this happens you will have to restart the level.
2. Be fast and vigilant. I.e if there is space on the grill or in the oven or in the fryer, use it. Keep a constant cooking cycle going.
3. 3 stars are awarded only on score, time doesn't matter. Take as long as you like to net big scores.
4. Bigger burgers mean bigger points but don't use the same food item more than twice in a row. Variety is the spice of life!
5. A 'complete burger' nets you bonus points so try to make sure every burger has at least a patty, lettuce, cheese, tomato, lid.
6. OVERKILL IS IMPORTANT to get you more points for the 3 stars. Don't just do the minimum to knock out their hunger gauge.
7. Drinks have zero point value. Only good for stalling zombies for time. Just keep on making the drinks so you have a pile of them on the left available to grab whenever you need them if you get overwhelmed. Not useful in burgers.
8. The same as a drink, if you want some extra time throw a bun lid at a zombie which is just 1 point but will keep them busy for a bit.
9. Similarly, some food items will go manky and black, this is also useful for buying time, throw them at the zombies and it will make them sick. Do not use black items in your burgers.
10a. Use the non-food items in your food truck for easy to grab extra points that don't need to be cooked.
10b. Your best non-food items are the metal fan/air vent worth 200 points, that is boss food. The radio for 100 points and the 2 Chinese hanging lanterns are 100 points each.
11. there will be 3 boss stages. Level 10 - 1 boss. Level 20 - 1 boss. Level 30 - 2 bosses.
12. If you're not going to feed a boss immediately it is best to just ALWAYS keep them busy with a drink or bun lid or lettuce or anything, as i found they would hit me pretty quick so it wasn't worth taking the chance.
To give you an idea of what you're working with, a list of all items point values can be found HERE.
Trophies you will earn in this step are:

Mega-Size Me trophy can be quickly and easily achieved by just stacking a bunch of drinks up in a burger, since you're going be making huge burgers anyway to defeat the bosses so you may naturally get

The Last Dance but if not, they can be achieved without too much difficulty by building a burger to the ceiling, using mainly the normal food items and then chuck in a few of the flat non-food items like the metal fan and paper fan for good measure.
Only 2 trophies are technically missable:

Circle of Life. This is because they require one-use items but if you have accidentally used the items already, all you have to do is replay the corresponding levels detailed in the Trophy Guide and once you have got 3 stars again, it will unlock the bonus item again.
Trophies you will earn in this step are:

Patty Pitcher
Step 3 - Small grind to 1,000 zombies.
This will be your last trophy. I recommend replaying level 18, which is exactly 2 minutes long and has 12 of the weakest schoolgirl zombies. It will take you no longer than 1-2 hours but just to be safe, I recommend when you've completed the level, to press continue, which forces the save icon, then press 18 again. I did it this way and had no problems. It only takes a few extra seconds. Another player may have had problems with it not saving when they pressed the replay button instead of the continue button.
Here you will earn:

Beat the first stage.
Play the tutorial if you wish to learn the basics, then simply pass the first level with any number of stars.

Beat a stage with three stars.
Make extra large burgers to make more points and bigger scores and you should get your first 3 stars in no time.

Beat stage 10.
The first boss level. One burger as high as the ceiling will take them down in one go (with no drinks inside).

Beat stage 30.
The final and hardest level! This 3rd boss battle includes TWO bosses!
The other levels are a breeze to 3 star and needs no real strategy, but this last level has a difficulty spike, I kept just getting 1 star (at around the 5000 points mark), it took me a few hours with plenty of trial and error to find a way to get 3 stars so here's how to guarantee you 3 stars:
Level 30 strategy tips:

2 x boss zombies -with a lot of schoolgirls chucked in- (Good luck! Just get rid of school girls quick with any single pizza or cheeseburger -patty with cheese on top while on the grill so that the cheese melts + bun lid-. Use big burgers to kill one of the bosses, then save the final boss to destroy with a monster 2,000 point burger).

EXTRA NOTE: You could do what I didn't do and keep feeding the last boss lots of little burgers, thus knocking its hunger meter down, then when it's low, give it the monster 2,000+ points burger for some awesome overkill that will net you more points.

Beat every stage.
Complete the game.

Change the tape in the radio.
Inside the food truck, look to your right hand side and you will see the stereo with 2 tapes next to it. Change the tape! You have a choice of Rock....Rock....or Rock! Enjoy!

Make a burger over one meter tall.
Easily done by using a bunch of drinks stacked on top of each other as they are tall items. Alternatively, just grab any other tall items like the kitchen roll, ketchup bottle, Chinese lanterns, stacking them up until it reaches the ceiling, add the bun lid and throw. Yummy!

Make a burger worth 2,000 points or more.
This burger will also need to be touching the ceiling. I recommend using the flat metal fan/air vent (worth 200 points) and the paper fan (for an extra 50 points) but mainly use the food ingredients, because they are all flat. Just keep layering it up, making sure not to put the same item too many times in a row and you will hit 2,000+ points. You won't see the point value until you have thrown the burger and it is being eaten but if it's near the ceiling, I guarantee it will be worth about 2,000 points.

Revive 100 zombies.
You will get this trophy naturally, before completing the game. A zombie is revived when you have fed them enough to fully deplete their hunger meter.

Revive 1,000 zombies.
This trophy is the only one that with be left upon completing the game and it is a slight grind. The fastest method I would recommend is to replay level 18 which is exactly 2 minutes long as has 12 of the weakest school girl zombies.
It will take you no longer than 1-2 hours. The maths there are:
60 zombies per 10 minutes.
360 zombies per hour.
720 zombies for 2 hours.
The amount you have remaining will be somewhere between there.
Just to be safe, force a save. When you complete the level, press continue so the save icon flashes, then press level 18 again. Instead of pressing the replay button as the save icon doesn't show when doing that so I can't be sure if the revives register that way.

Defeat a Mega Zombie with one burger.
Mega Zombies are the Bosses, and can only be found on level 10, level 20, and level 30.
See 21st Century Buns.

Use the Hannya Mask and Noh Mask in one burger.
Technically missable
The masks are one-use items. Meaning you should save them until you have them both unlocked and ready to put in the same burger, to avoid having to replay the levels and getting 3 stars again.
Hannya mask - Unlocked by getting 3 stars in level 14.
Noh mask - Unlocked by getting 3 stars in level 16.
Once unlocked they can be found next to each other on the left hand side of the truck, this is what they look like and where you'll find them: 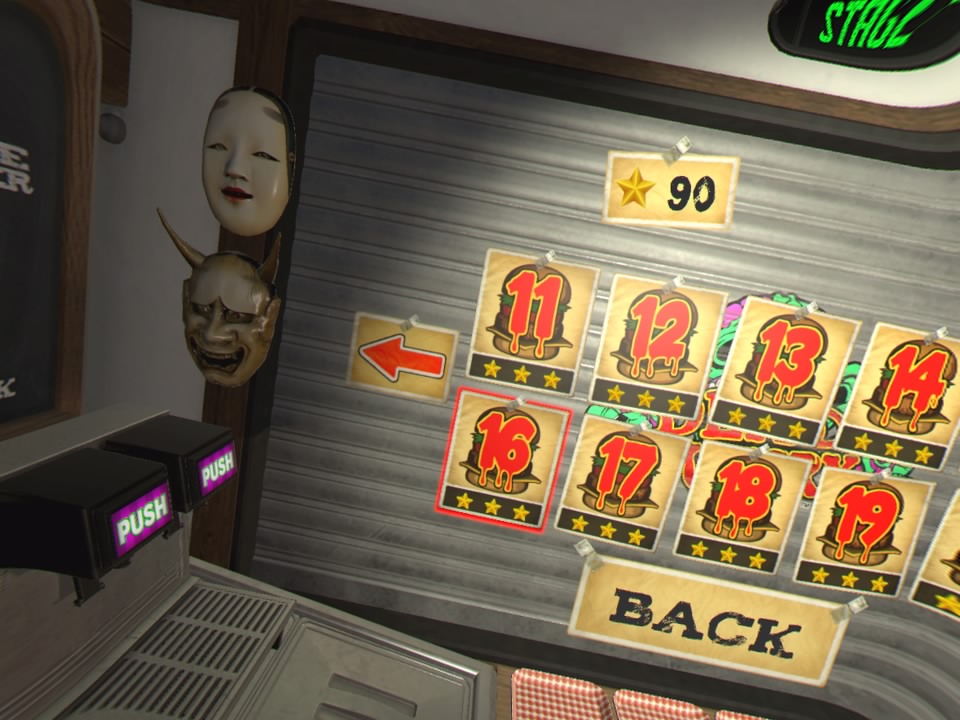 Be careful when placing the items in the same burger stack, because sometimes, if you're going too fast, items can accidentally go in the wrong stack.

Use an egg and the Chicken Wing in the same burger.
Technically missable
Eggs - Unlocked by getting 3 stars in level 20. (maybe less stars).
Chicken Wing - Unlocked by getting 3 stars in level 26.
The chicken wing is a one-use item. Meaning if you accidentally use it you will have to replay level 26 getting 3 stars again, to unlock the chicken wing again. The eggs are permanent items that once unlocked will be there to use every level.
The eggs will be found next to most of the raw ingredients, on the left hand side, in the tray next to the tray of patties. The chicken wing will just be one wing and will be on a green tray on the right hand side. For ease, I'll add this picture to show you where it will be: 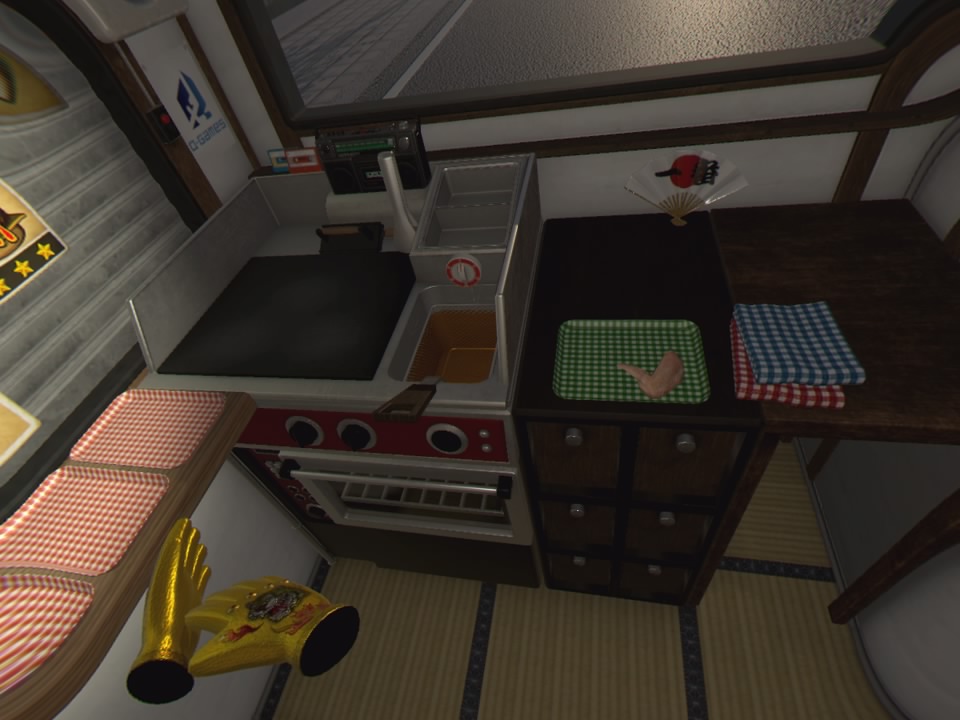 I don't know if it matters but I cooked both my chicken wing and egg as they are both cookable items (the wing cooks in the fryer, crack the egg on the grill). You might still unlock the trophy if the 2 items are raw and in the same burger but I'd cook them just to be safe.
Be careful when placing the items in the same burger stack, because sometimes, if you're going too fast, items can accidentally go in the wrong stack.

Throw an item 15 meters.
Self-explanatory, an easy trophy. I just threw a raw patty like a Frisbee and the trophy unlocked.

Back to Dead Hungry

Also tagged with one or more of these keywords: Trophy Guide, VR Required